LOUIS VUITTON SPEEDY HOW TO SPOT A FAKE?

LOUIS VUITTON SPEEDY HOW TO SPOT A FAKE?

In today’s post from the cycle of how to distinguish fake from the original, I wanted to introduce you to the bag Louis Vuitton Speedy.

Probably not everyone knows that in the Louis Vuitton stores you can check the authenticity of the bag. It lasts only few days.

If you do not have the possibility to buy bag in the official store and planing to buy neverfull through the Internet, I invite you to read my article: how to spot a fake Louis Vuitton Neverfull bag.

1. Pay attention to the product description. Very often I’ve seen on the Internet auctions which name was slightly twisted, for example Luis Vuitton or Louis Vuiton. After receiving such a fake, the seller could for example write to you that in the auction there was not written Louis Vuitton, but quite another name… and that’s why bag is not original.

2. Elements of leather bags (handles, pullers and finish at the top) darken and gain a very distinctive honey color. So if you buy used bag and handles are very bright, it means that either someone was not wearing that bag – which is unlikely, or you are just dealing with a fake.

3. Leather element through which the handles are attached to the bag. Gold circle stud must be attached perfectly symmetrical and may not overlap the seam (as at the image of fake bag on the left side). Seams in the original bag are perfectly straight. In the bag version with brown stitching, the color of thread is ideally matched to the color of the skin. On the left photo fakes to the right the originals. 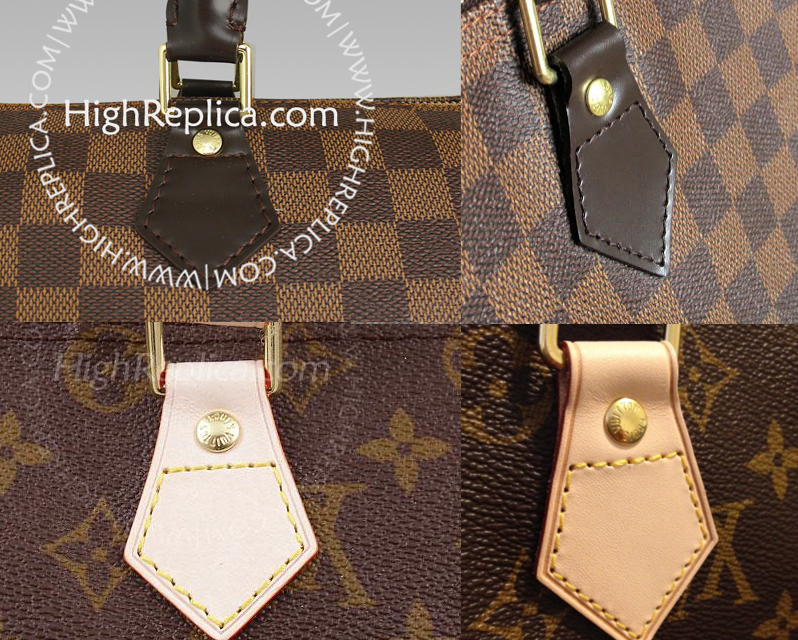 4. Leather element on the side of the bag at the place where the zipper is sewn, should have a groove in the skin at the edge. Seam which is V-shaped should be very close to the letter R (not as on the counterfeit which pictures you can see on the left side – it is approximately 3-4 mm from the letters R). On the left photo of fakes and on the right photos of the originals. 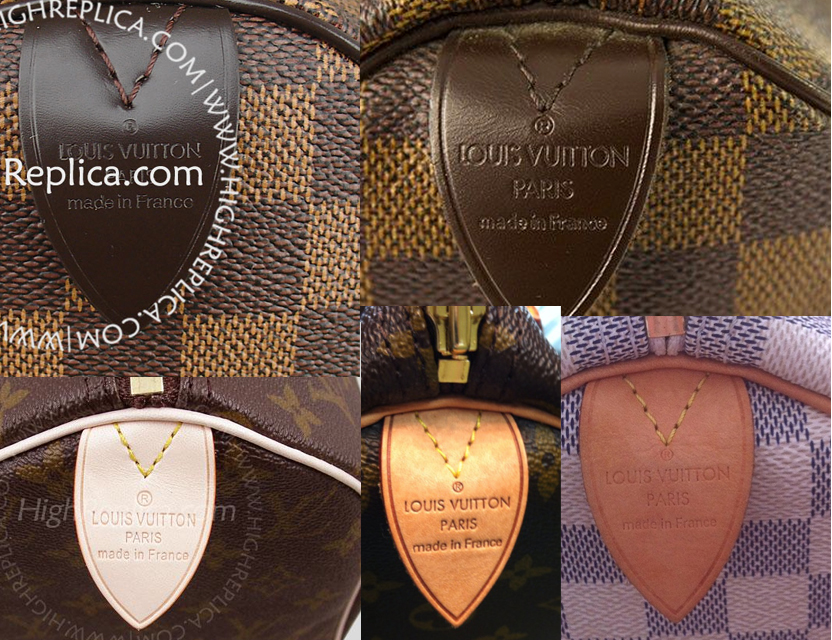 5. Inside the bag there is a leather element with the metal element in the D letter shape (it can not be round). Leather element should overlap seam about half a centimeter. Look at the picture on the bottom left – leather element in the counterfeit overlaps seams of about 2 cm (fake). In the original bags seams are perfectly straight and do not stand out, their colour perfectly matches the lining. Gold ring with the words Louis Vuitton is fixed closer to the edge where the D-ring is attached, on the picture at the bottom left you will see that the circle is in the middle of the leather item (fake bag). Also note the shape of the leather item. It is broader at the top and tapers downwardly and is slightly tapered towards the bottom. On the left photo of fakes, at the right originals. 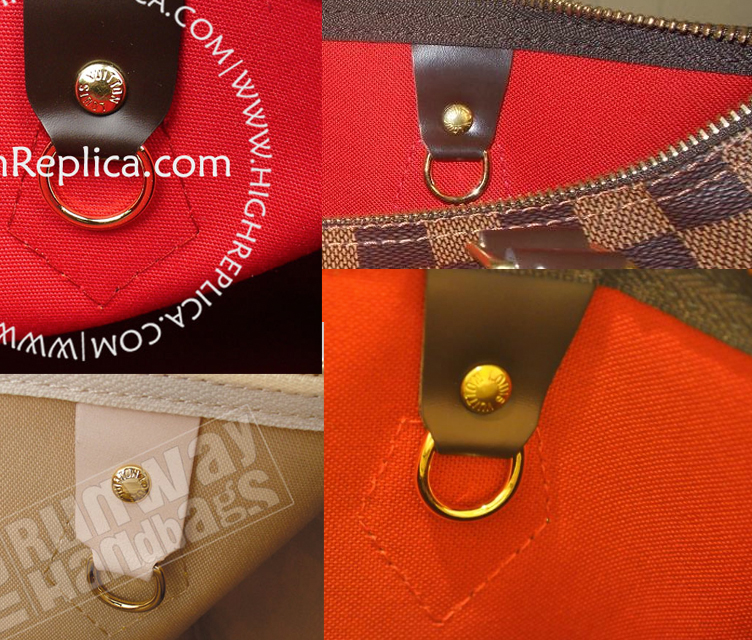 6. Leather element with the code is under internal pocket. Note that in the original bags (at the right) it overlaps slightly on the seam that secures the handle. In the fake bags this element overlaps about 2 cm. Gold ring with the inscription Louis Vuitton is mounted closer to the lower edge of the leather element and it is perfectly symmetrical. The fakes often have this element in the middle of the leather piece and the golden circle is nailed crookedly. On the left photo fakes, on the right originals. 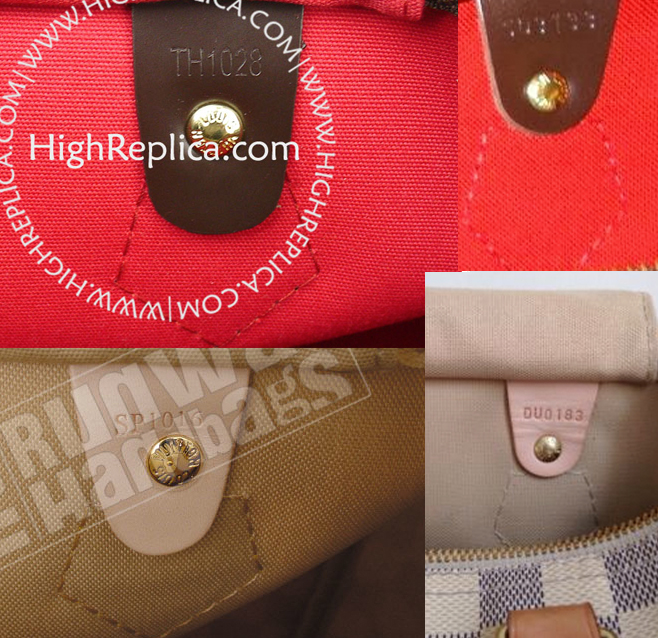 7. Padlock, which can be worn on a leather piece on the side of the bag, and of course also you can use it to close the bag (as at the end of the lock is leather tear with a hole) should have on the one side letters LV, while on the other side, the inscription Louis Vuitton Paris. The intersecting letters LV must be perfectly stamped. Bottom of the V letter could not touch the L letter. On the left fakes, on the right originals. 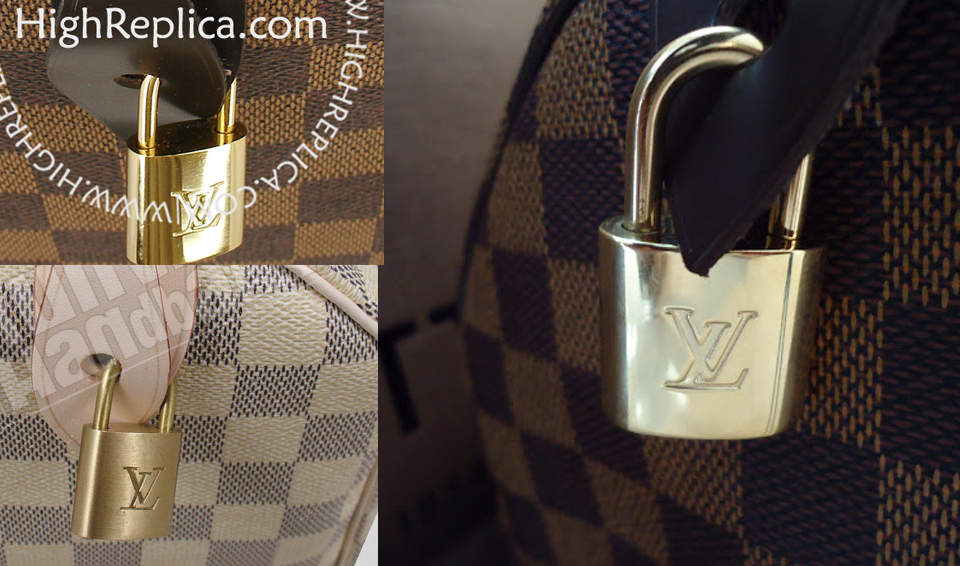 I hope that now you won’t have any problems with buying by the internet the original Louis Vuitton Speedy handbag and without any hesitation you will know how to spot the fake.

Post louis vuitton speedy how to spot a fake? appeared first on shinysyl.com